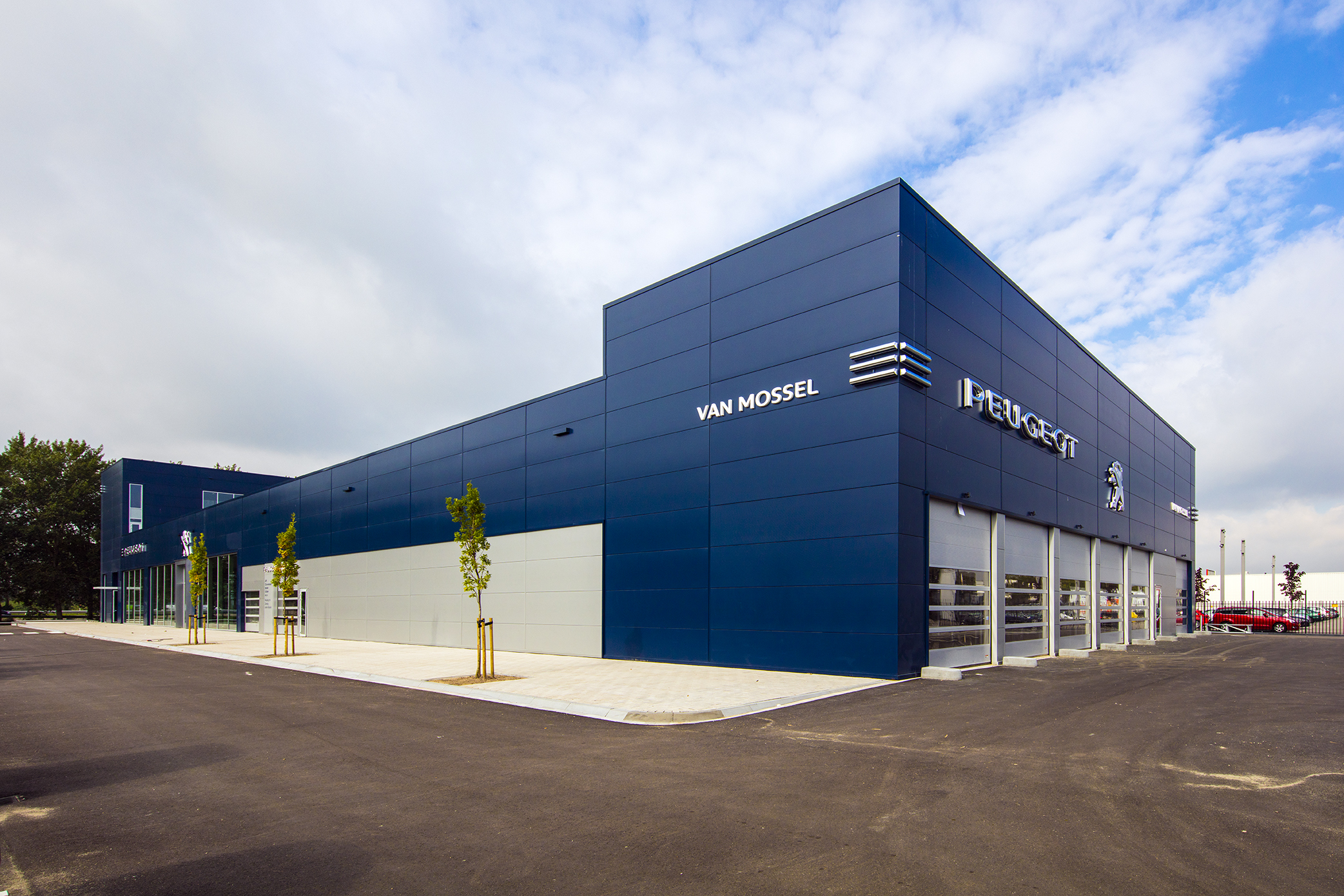 In collaboration with Van Mossel Groep, a new Peugeot dealership has been developed on the site located at the Klokkenbergweg 29 in Amsterdam. It is an extremely high-profile location on the Amstel III industrial estate situated along the A2 and A9 motorways.

Van Mossel Groep’s new premises for the Peugeot dealership in Amsterdam Zuidoost were designed as a flagship store. This means that the showroom had to have a regional function and relatively large size to enable all possible Peugeot models to be displayed, if necessary in a number of different finishings.

Similar to other automotive businesses in the area, the showroom is oriented towards the A2 motorway and the workshop is pointed towards the Klokkenbergweg, via which the site is accessible. Given the height of the Audi flagship store situated opposite and the location of the site, the programme of requirements was formulated in order to build the desired office space on top of the showroom on the motorway side in order to make the building’s facade optimally visible.

The visibility is also boosted by the need for the flagship store – due to its location – to be a specific shade of blue (Blue Box concept) in accordance with the factory’s Corporate Identity & Design requirements.

The building has also been heightened on the Klokkenbergweg side and shaped in such a way that it effectively creates a second facade, enabling compliance with the municipal requirements in relation to this matter.

These modifications give the building its specific shape: relatively tall on the A2 motorway side and the Klokkenbergweg side, and relatively small in between.

To prevent the premises from becoming a blue monolith, the facades of the showroom will feature large glass panels and those of the workshop will feature silver-grey sandwich panels with a different style.

Demolition phase
Flora and fauna
– Installation of bat boxes
Reuse of materials
– The materials (iron, plastic and concrete) will be stored and removed separately, after which they will be processed for reuse.
– The debris from the demolition will be processed into aggregate on site for the foundations of the new paving.

During construction
– Responsible management of waste: separation and minimisation.
– Safe and energy-efficient lighting of the construction work.
– Efforts to raise awareness of energy consumption during the execution phase.
– Use of drinking water will be monitored throughout the entire execution phase.
– Basic principle: maximum possible use of prefabricated components.
– Use of FSC wood.
– Execution involving BREEAM-NL certified companies, as a result of which an environmental policy plan will be formulated.
– Safety expert present within the scope of HSE policy.

Following delivery
– Monitoring of the systems to increase comfort
– Transport plan available for employees and visitors.
– The location is optimally accessible by public transport (bus and train).
– The PV panels generate energy to such extent that the use of grey energy is reduced.
– Charge points for electric cars on site, the energy for which is generated by the PV panels.
– Submeters for water and electricity allow targeted consumption management.
– Permanent exhibition space near the entrance hall.
– Display of information regarding energy consumption, provision of energy back to the grid, gas consumption and CO₂ emissions.
– Plants that are fully dependent on local rainfall throughout all seasons of the year.
– Facilities and a green area included on site for the flora and fauna. 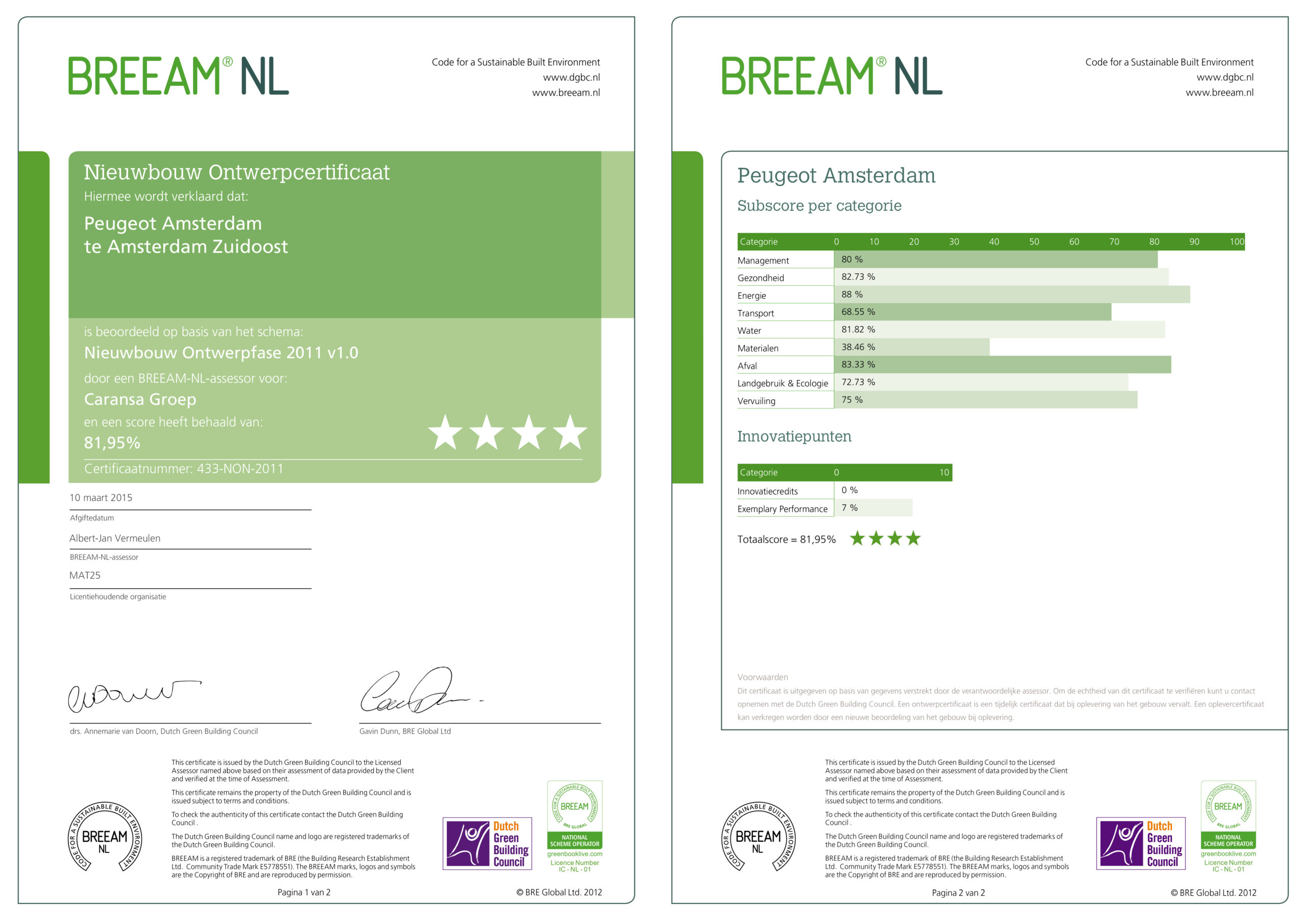 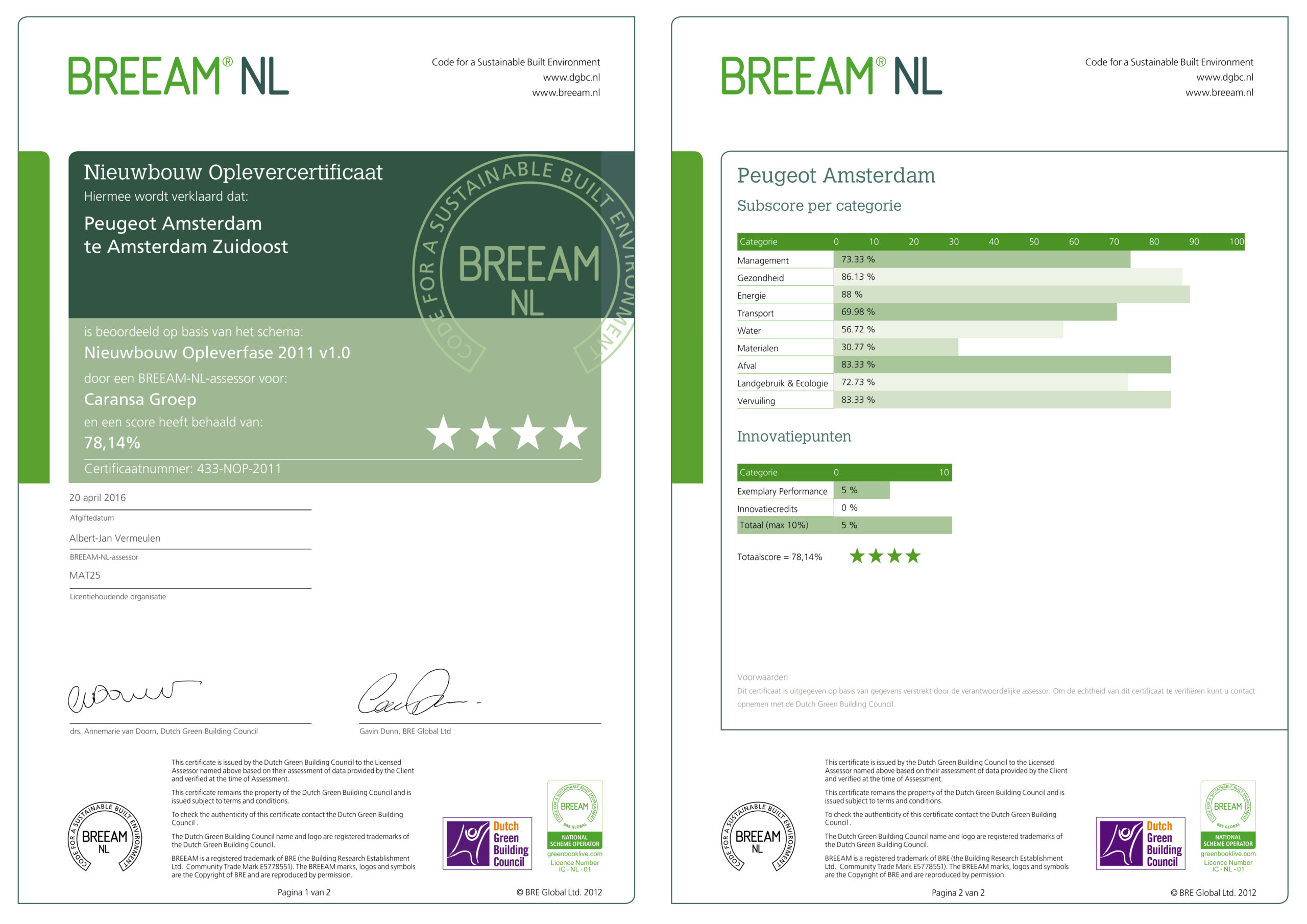 The investment involved in realising this lofty ambition will partly be funded by investment credit and operational savings. In addition, it will ensure a better building: healthier, greener and cleaner.