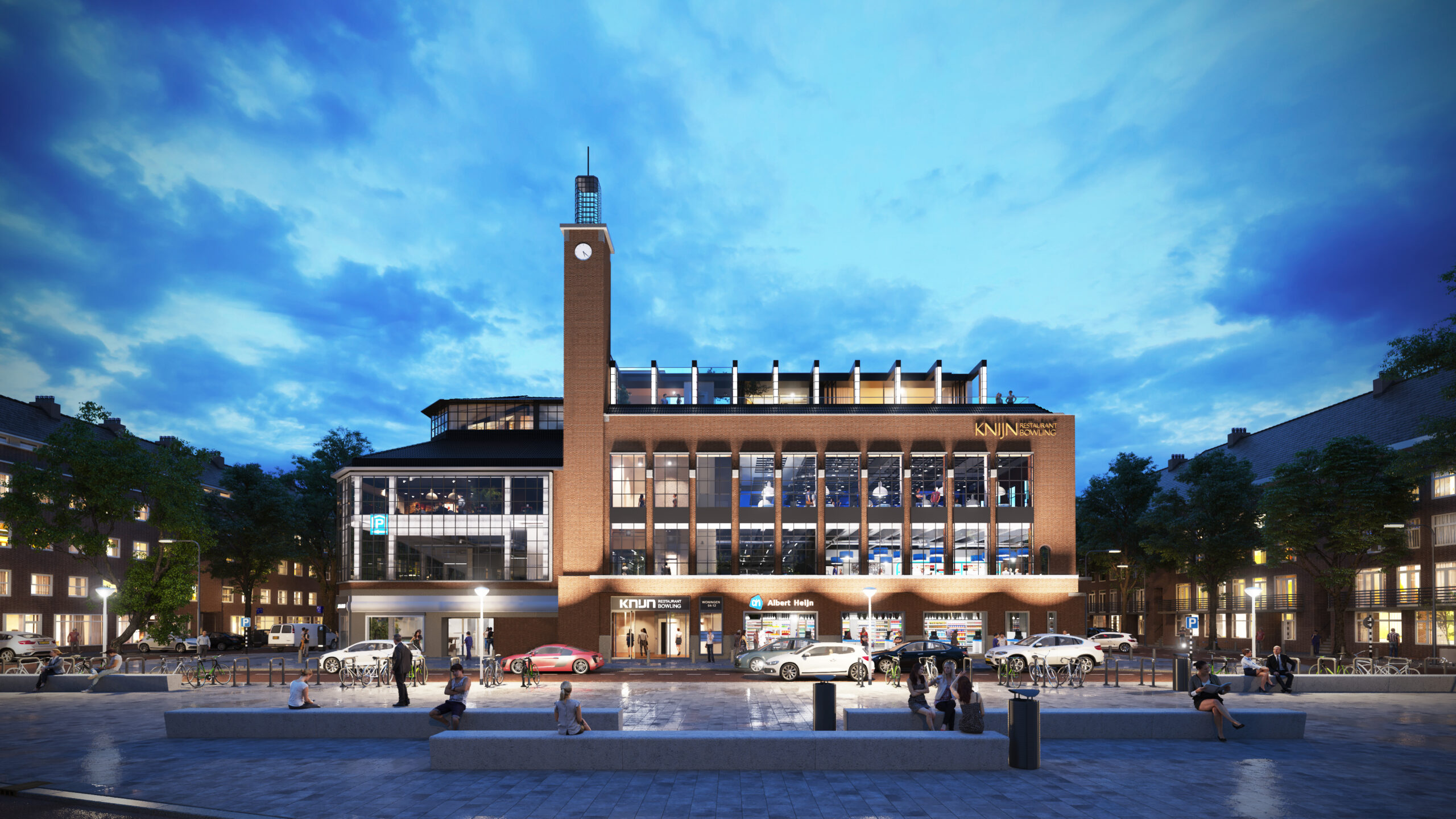 In 1931, the new building at Scheldeplein 1-5, described by the press as ‘the glass palace of the Sieberg family’, opened its doors for the very first clients of the Sieberg garage company. The building was designed by the architect N. Ch. Dekker.

“The architect drew his inspiration from the Amsterdam School of architecture as well as the modernism movement.”

The Sieberg building consists of several storeys together with an indoor ramp. The balconies on the façade were designed to facilitate the entry of firefighters into the building. In 1939, a large part of the building was fitted out for the assembly of Willys passenger cars. In 1943, during World War II, the building was requisitioned by the occupiers for the storage of war materials. A few years after the war, the Dodge Company opened a showroom and a petrol station in the Sieberg garage. The Knijn family purchased the building in the 1960s.

They operated a Fiat showroom and a repair business in the building. After the repair business was moved to Weesp, the 2000 m² of space that became available on the second floor was used to start a bowling centre. The official opening of Knijn Bowling took place on 9 September 1971. In 1979, ABN AMRO acquired the building. The bank occupied almost the entire ground floor. Since 2006, an Albert Heijn supermarket has been based in a large part of the ground floor as well as part of the first floor.

In 2012, the Caransa Group purchased the building. The car park has always retained its functionality and been used by the building’s tenants. In 2014, the car park, now referred to as ‘Parking Scheldeplein’, was renovated and upgraded to comply with modern-day standards and requirements for a car park. In 2015, Albert Heijn expanded its supermarket and completely refurbished it. 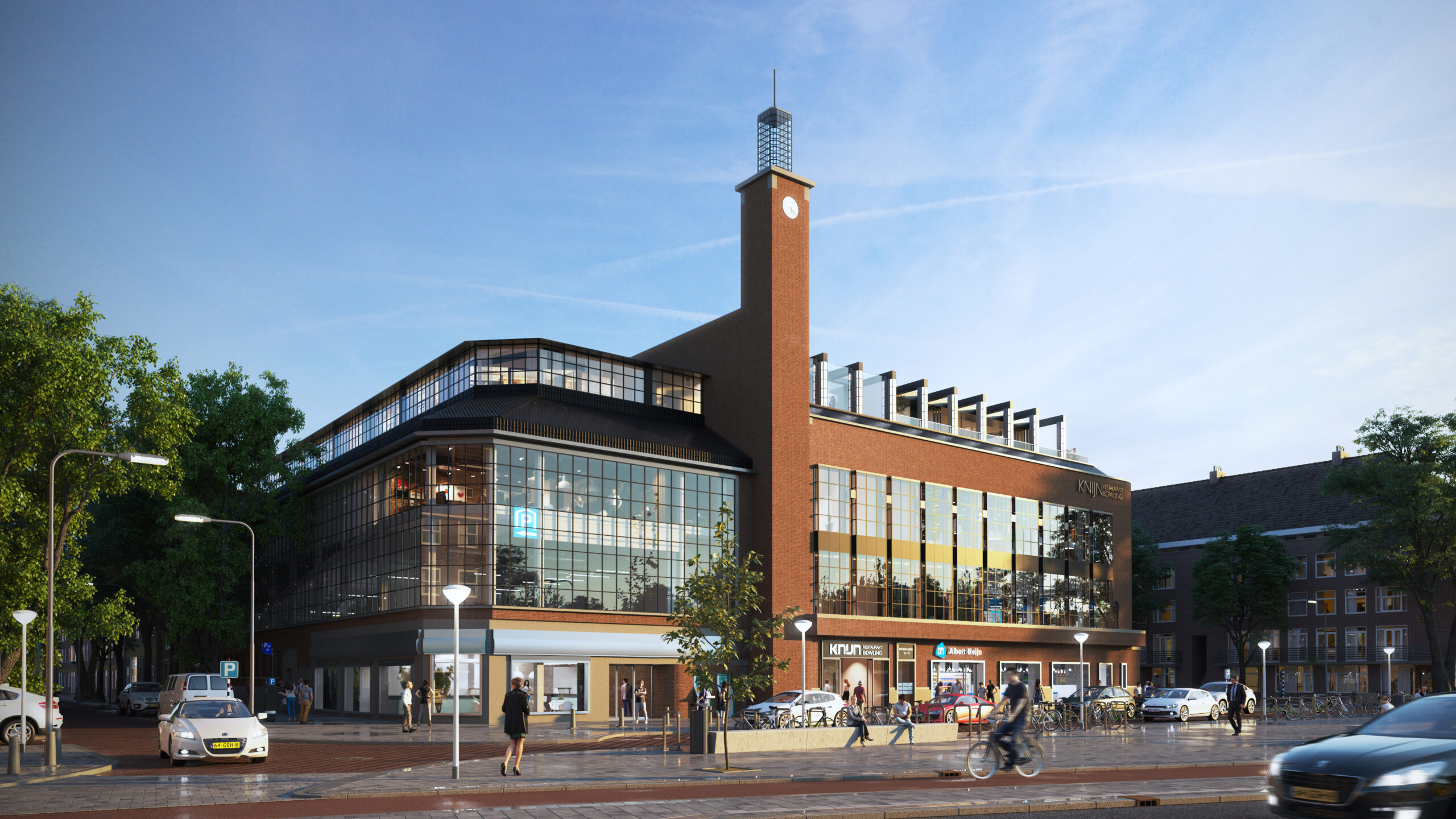 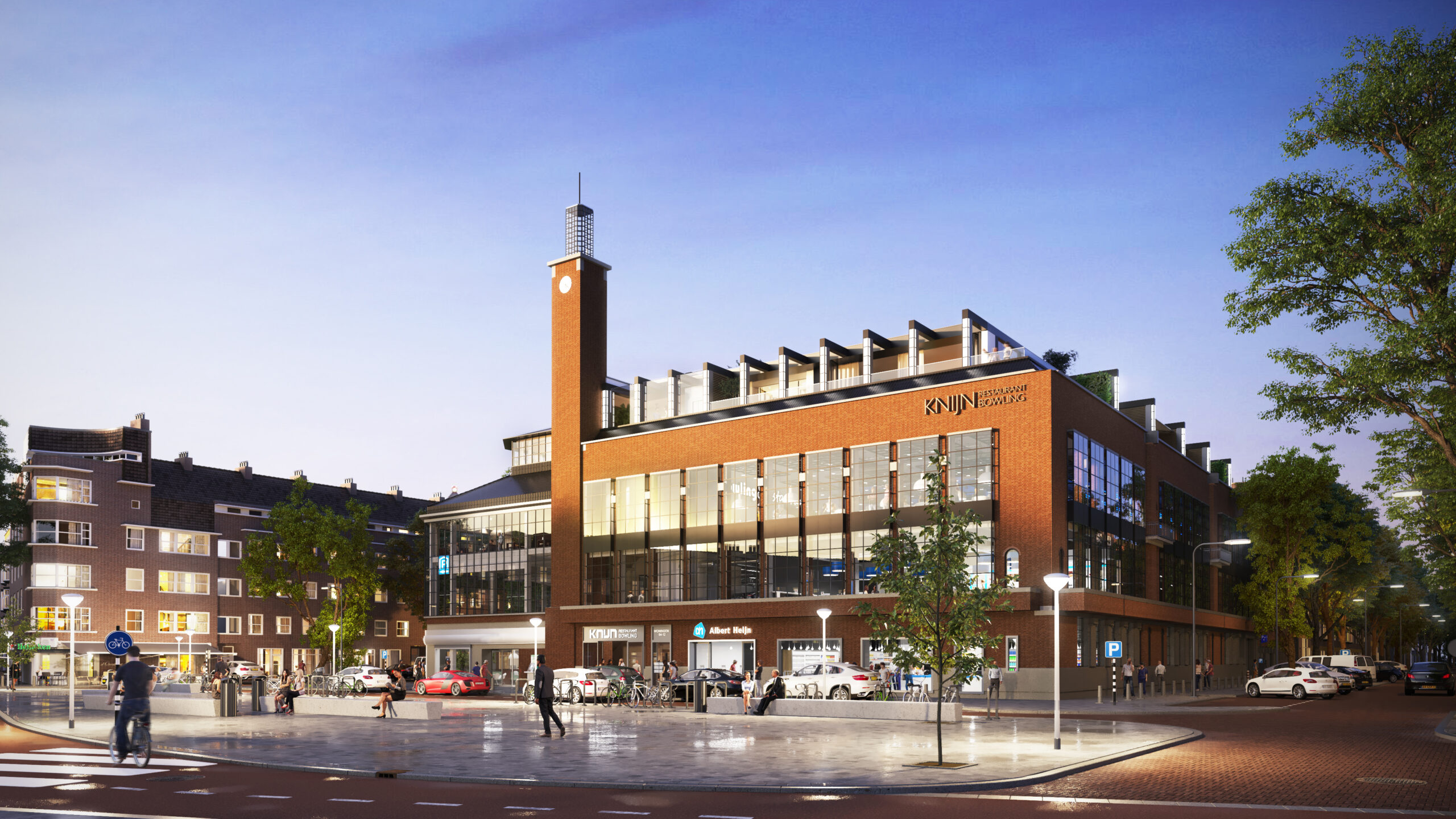 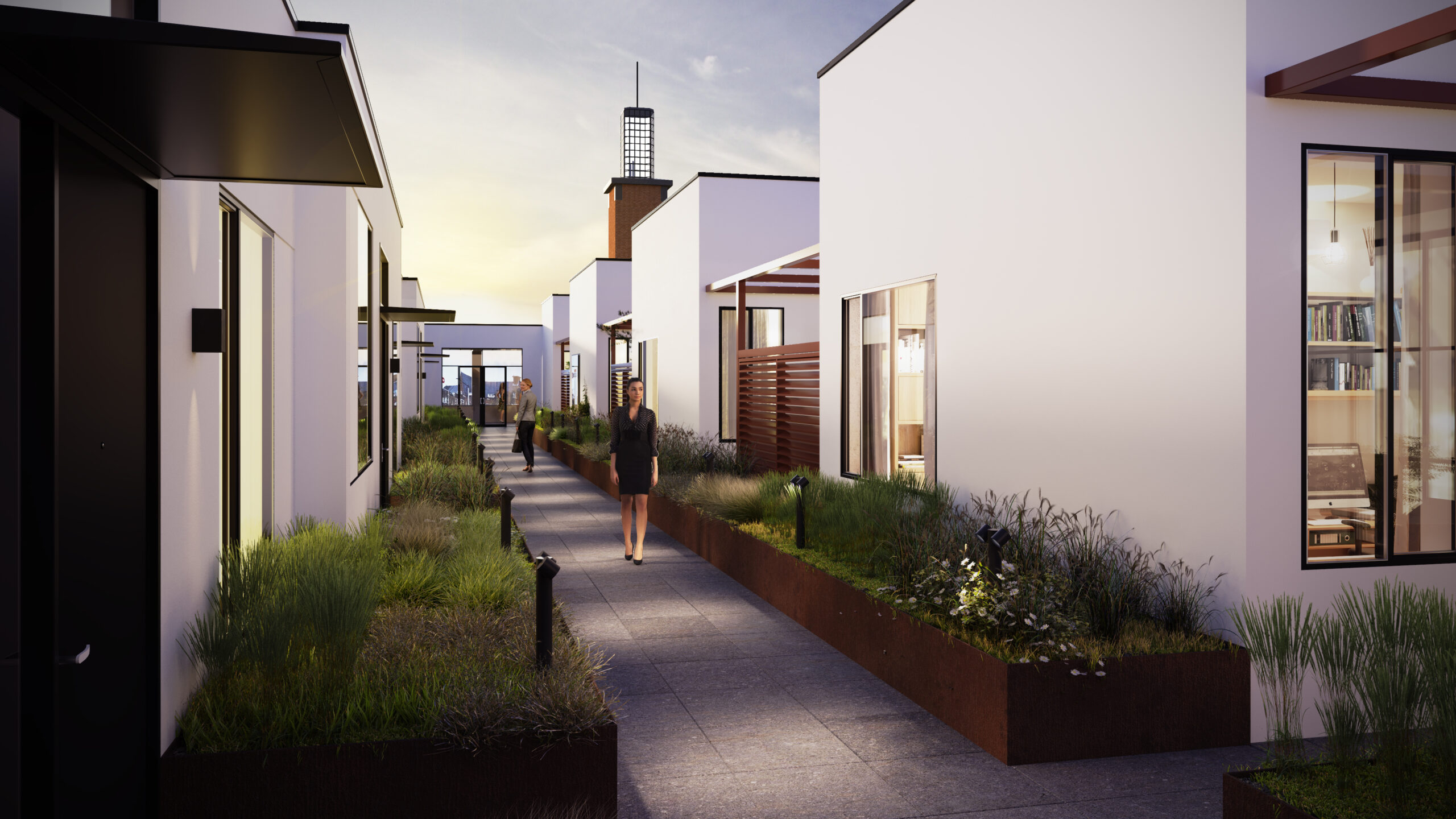 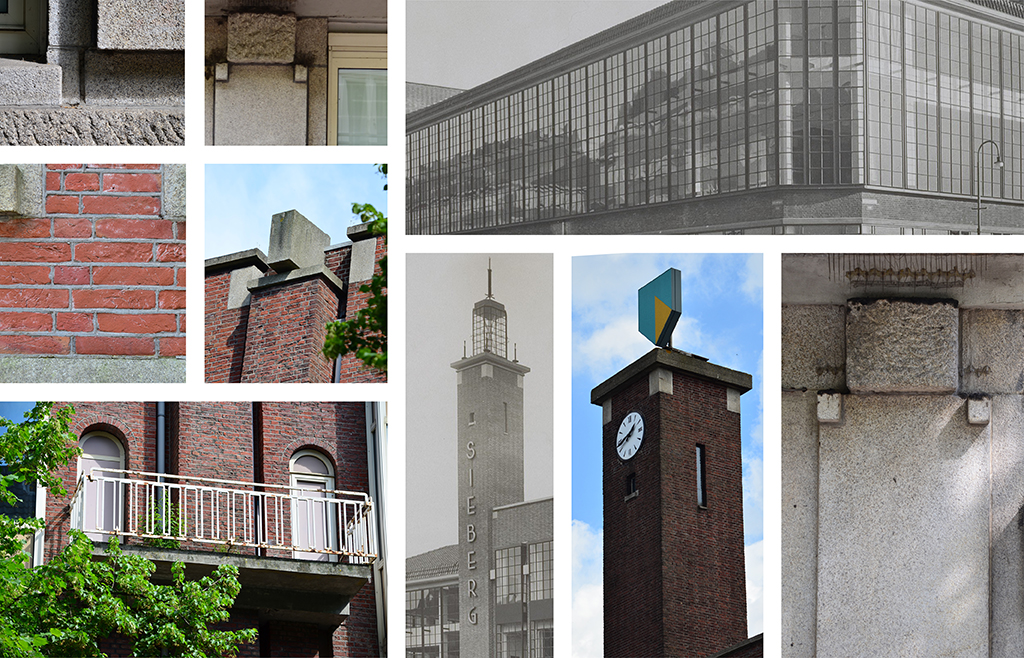 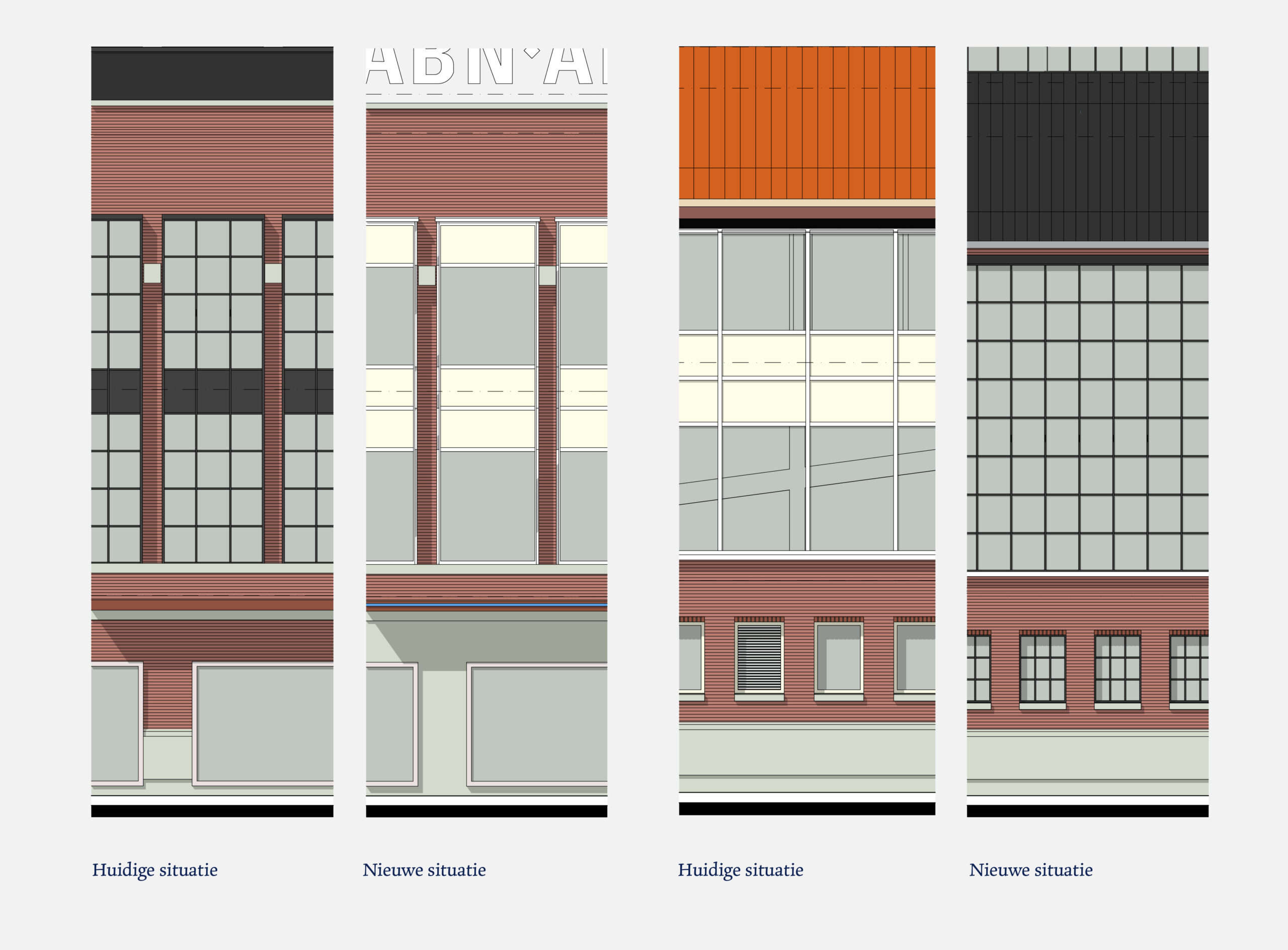 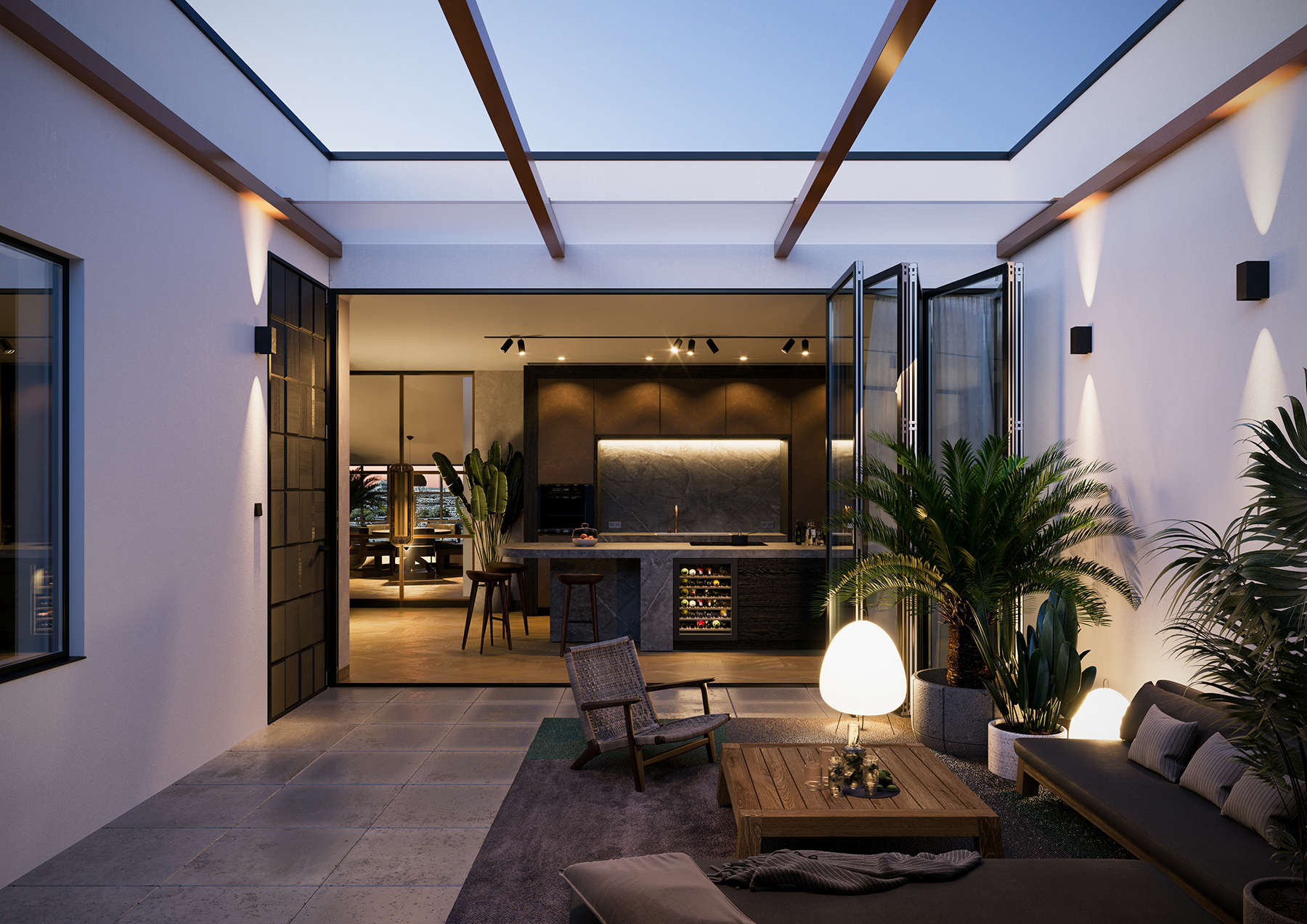 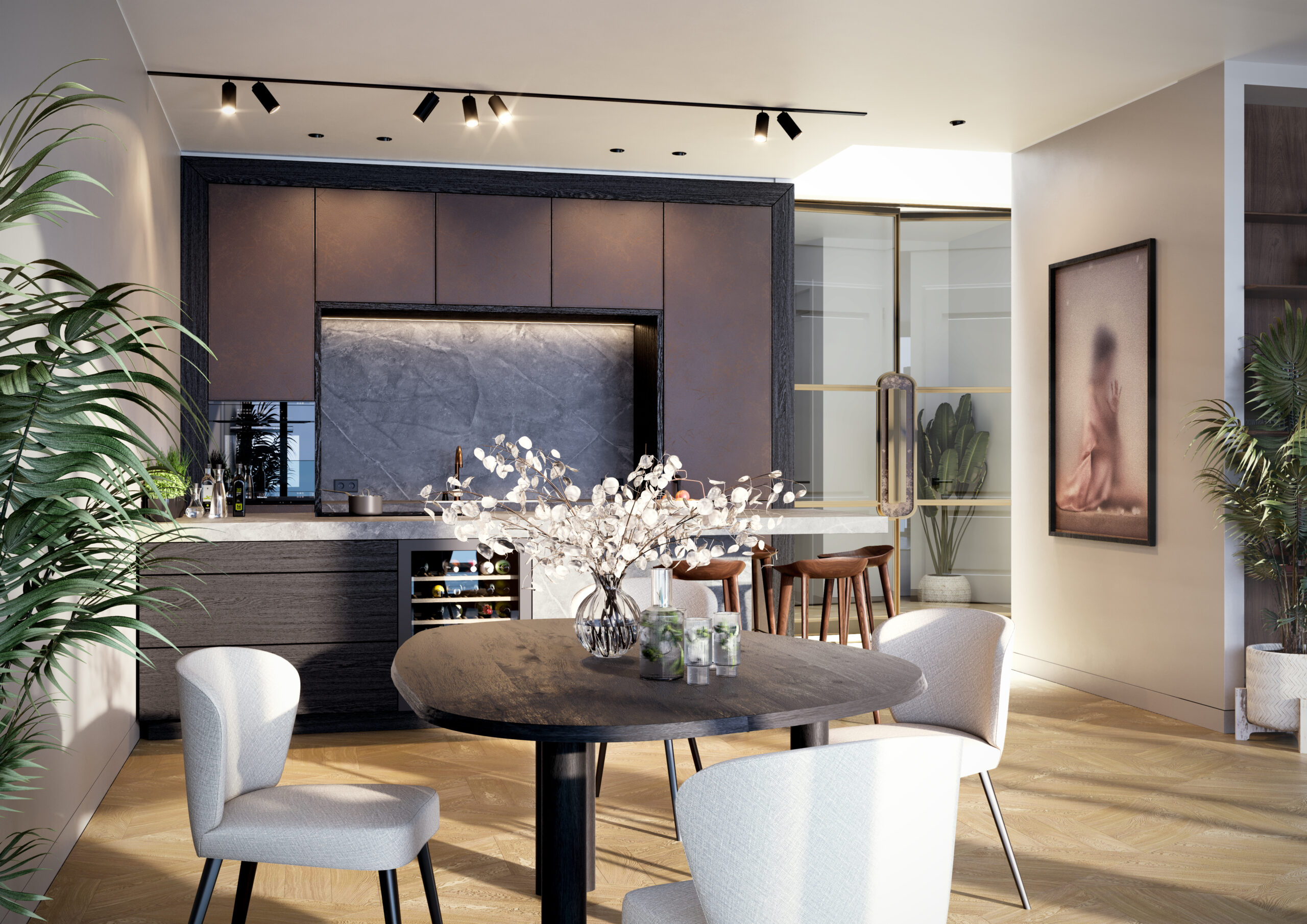 In recent years, the Scheldeplein has undergone positive changes, including redevelopment of the square and expansion of the RAI complex, where The Roast Room is now established, among other new premises. The appearance of the premises at Scheldeplein 1-5, which occupies a prominent position on the square, no longer matches the area’s current look. We intend to give these premises the stylish and appropriate look that they deserve.

Present situation
The building comprises the entire front of a block of houses, bordered by the Geulstraat and Geleenstraat and the Scheldeplein, and has a total ground surface area of somewhat more than 5500 m². The building is based on a reinforced concrete frame structure. The entire façade consists mostly of glass panels in plastic window frames, with the remaining elements made of soft-red hand-moulded bricks and Bavarian granite. The façade has gone through various transformations, most strikingly with regard to the design and layout of the windows. The original design was based on a façade consisting of small windows, which gave the building a rather luxurious look and feel. In the 50s and 60s, these smaller windows were replaced by large glass panels. At a later stage, in the 1980s, the steel window frames were replaced by plastic frames. The entire building is leased to tenants. Albert Heijn and Keukenhuysch are the ground floor tenants. The car park is located on the first floor, which is accessed from the Geulstraat. The entire second floor is occupied by the Knijn bowling centre and its entranceway from the Scheldeplein. The plinth of the façade has an ‘unsettled’ look and feel about it. The entrances do not form a harmonious entity, and the plinth is not in harmony with the façade as a whole. The manner in which advertising is displayed on the façade also lacks a feeling of consistency and uniformity. The tenants present themselves in a variety of ways at various places on the façade, which also contributes to the rather fragmented and cluttered look of the façade. In short, the building does not have the allure or present the kind of image that this striking location deserves.

Renovation
In 2014, together with Dok Architecten, we started to formulate a redevelopment plan. The entire redevelopment involves a renovation of the façade and the addition of a new storey for the construction of apartments. The current façade will be returned to its original state. The large window openings in the plastic window frames will be replaced by small panes with slender steel frames. The brickwork and granite on the façade will also be refreshed. The new façade will restore the allure of the premises.

Roof structure
The new top storey, which extends over the entire existing roof surface, provides space for a total of nine stylish apartments. The new storey will be built in the same style as and in harmony with the new façade, thereby ensuring that the new storey does not dominate the frontage. The terrace partitions influence the overall look of the façade and add to its rhythmic character. As a result of the addition of the new storey, the overall height of the building will be in line with the height of the surrounding structures.

Apartments
The apartments realised in the new top storey will consist of 3-room and 4-room apartments, varying in floor space from 128 m² to 174 m², each of which will have its own outdoor area.

“Every apartment has its own outdoor space.”

Façade Renovation
The plastic window frames are being replaced by slender steel profiles of a dark anthracite design. The large glass fronts are being replaced by windows measuring 70 x 70 cm fitted with HR++ glass. A ‘window section’, which extends from the floor of the first storey until the ceiling of the second storey, consists of three horizontal windows and eight vertically positioned windows. Each window section is interrupted by aluminium panelling in the middle where it adjoins the floor of the second storey.

On the Scheldeplein side, the new façade of the roof structure is composed of steel piers fitted with glass and with lighting on the front. These piers also function as terrace partitions, pergolas, or façade elements. The piers of the new roof structure are positioned in line with the piers of the existing façade. The façade alongside the Geleenstraat is similar to the façade facing the Scheldeplein.The design of the new façade section alongside the Geulstraat matches that of the underlying renovated façade. The façade is fitted with glazing along its entire width, and the angled roof is covered with tiles at an angle in line with the present tiled roof.”

“The three façades each have a character of their own, taking into account the structure of the existing building.”

In the façade facing the Scheldepleingevel, the vertical lines are in line with the steel portals. In the Geulstraat façade, the façade is reflected, as it were, in the new roof structure.

The glass lantern is an indispensable part of the original façade design, and it is being returned to its rightful place on the existing tower. The unsightly advertising presently in place is being removed and replaced by a much more subtle form of advertising that makes use of slender steel lettering in a soft yellow copper colour.

Details
The original building details that are still present in the façade will be preserved during the renovation process. These include the Bavarian granite details surrounding the window frames and set into the façade as well as the soft-red brickwork. Alongside the Geulstraat and Geleenstraat, the entire plinth is fitted with a granite surface displaying a relief. Beneath the overhang alongside the Geleenstraat, the glass fronts alternate with natural stone piers. The façade plinth is almost completely covered with granite. Granite is again visible in the façade brickwork, and the edge of the roof is finished off with a granite strip. The original glass lantern, which was set back on top of the tower, was removed at the end of the 70s.

“The glass lantern is being put back in place during the renovation and restored to its former glory.”

The clockwork presently in place is being retained and started up again. As was originally the case, the advertising is being integrated into the façade in a more subtle fashion, insofar as possible.

This will be a sustainable redevelopment project. The plastic window frames are being replaced with slender and insulated steel frames. In addition, the glass on the existing floors will be replaced with insulated HR++ glass. Solar panels will be placed on the roof to generate power for the apartments. Upon their completion, the apartments will comply with the requirements for an energy rating of A. 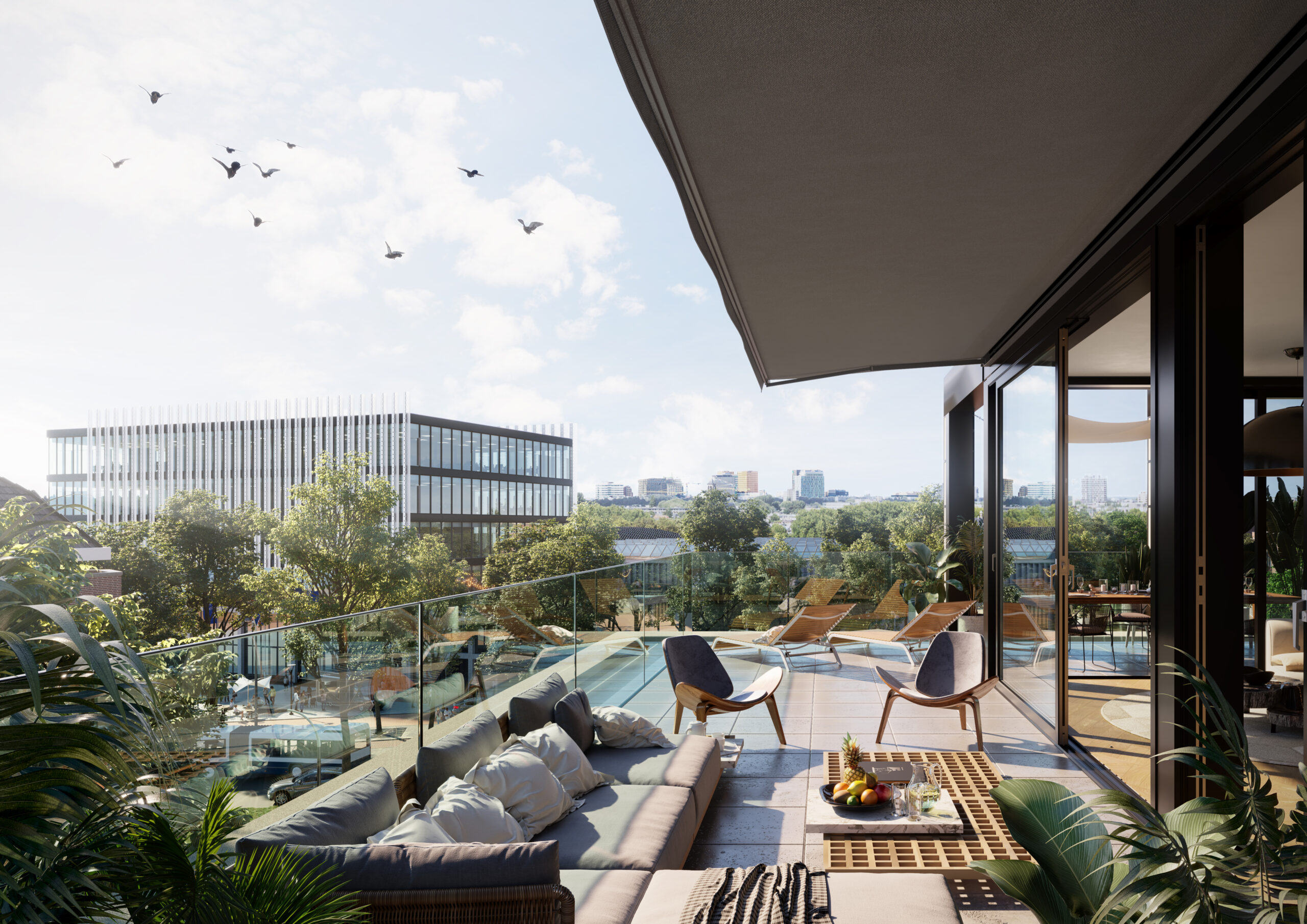 The entire redevelopment project consists of the following elements and will be carried out in phases in the following order:
– expanding of the exsisting cellar area underneath Scheldeplein 1
– renovation of the façade
– new floor on the rooftop with nine rental flats.

Newsletter May 2022
Start of construction of apartments on the roof

If you would like to be updated on the progress of the project, please enter your particulars below. If you have any specific questions regarding the project, you can submit them to scheldeplein@caransa.nl.